In Canada and the northern United States stalks a monster many people still believe actually exists to this day; Wendigo. This monster’s name translates to “the evil spirit that devours mankind” and it’s associated with the coldest times of the year. In the darkness of winter’s icy grip food is scarce and survival becomes paramount.

Wendigo must feed on human flesh, though no matter how much meat they consume these monster’s hunger is never satiated. This eternal hunger is so overpowering to them that they rarely have lips because Wendigo can’t resist eating them. So they constantly hunt but never find satisfaction. Such is the fate of all Wendigo; a pitiful end for a cursed creature. 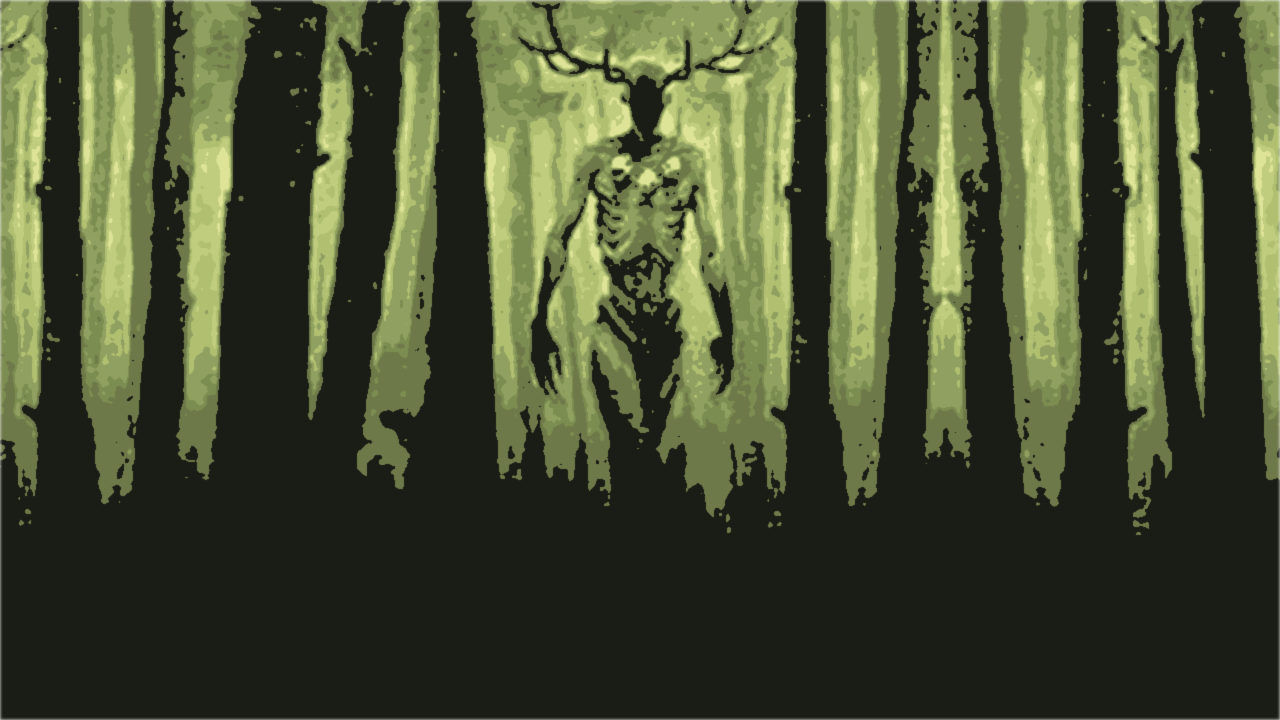 If you become aware of a Wendigo stalking you, then rest assured, it wanted you to notice it.

Though, it was not always so. Once these monsters were ordinary people. But sometimes when Darkness watches the mortal realm, the act of cannibalism brings about the curse of the Wendigo. Whether the consumption of human flesh comes from murder or not doesn’t matter. the cannibal is transformed into a malevolent supernatural entity with the instinct to feed.

Descriptions of Wendigo vary, yet they have one consistent attribute, which is a constant smell of decay that follows them around. And the presence of one is also indicated by a sudden drop in temerature of the surrounding area. Some sources say they have dark yellowish skin, hair like an animal, or a decaying look about them. Wendigo have elongated gaunt physiques, and are much taller than an average human. Their heads are known to appear like skeletal deer with long elk-like horns with a set of glowing eyes. They are also known to appear with bestial humanoid faces with missing lips, giving it a permanent yellow fanged smile. 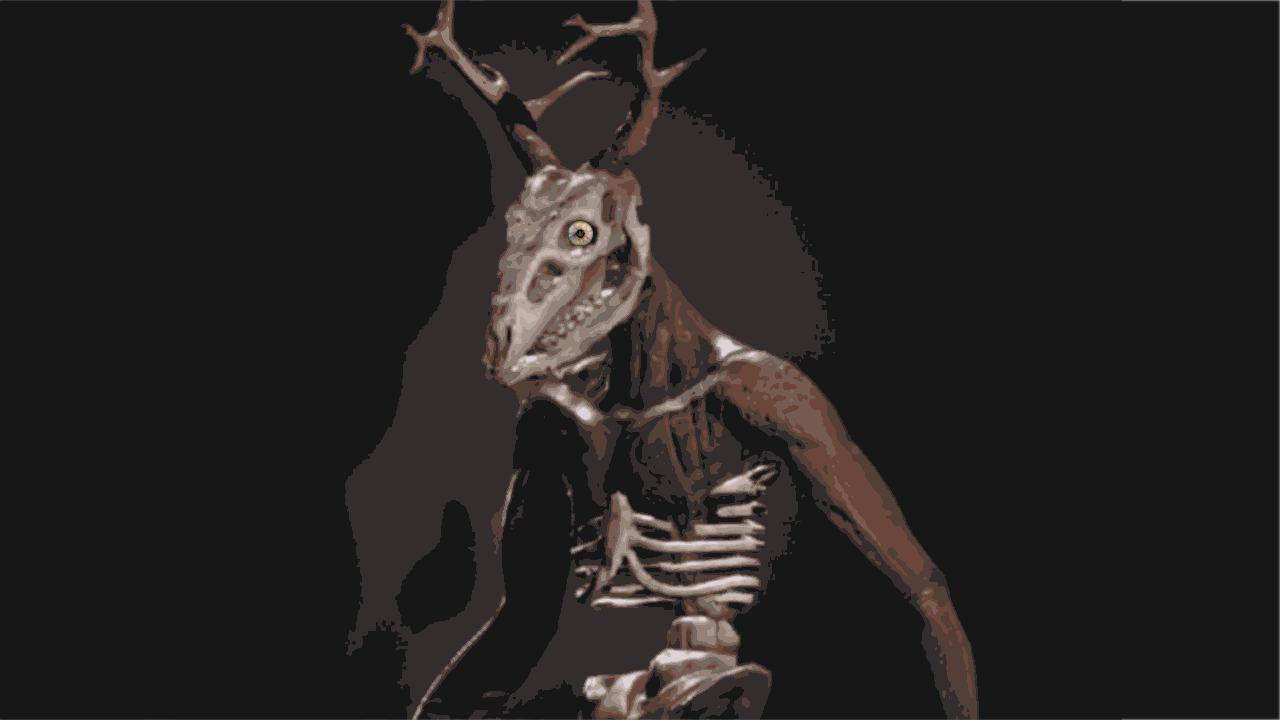 No matter what the Wendigo looks like, it is guaranteed to be horrifying.

The demonic monster is powerful in spirit and no longer wholly part of the physical world. They grow bigger the more flesh they eat, becoming stronger and more hungry after every meal. Being excellent hunters, Wendigo have enhanced speed, senses, and endurance. They are able to utilize all-terrain to their advantage, and often have sadistic glee in manipulating prey into traps. But the list of their supernatural abilities goes on. They can hear an anxious heartbeat a mile away, and can even utilize dark magic granting them influence over the weather to a degree. Allowing them to use a paranormal fog to manifest around their prey as they hunt.

Wendigo hunt prey sadistically, hoping their next victim will finally satisfy their insatiable hunger. They’ll shriek, growl, and toy with their victim. Even allowing them to escape to give them a false sense of safety. All the better to use their ability to mimic human voices to lure their prey into the desired location to feed on them. 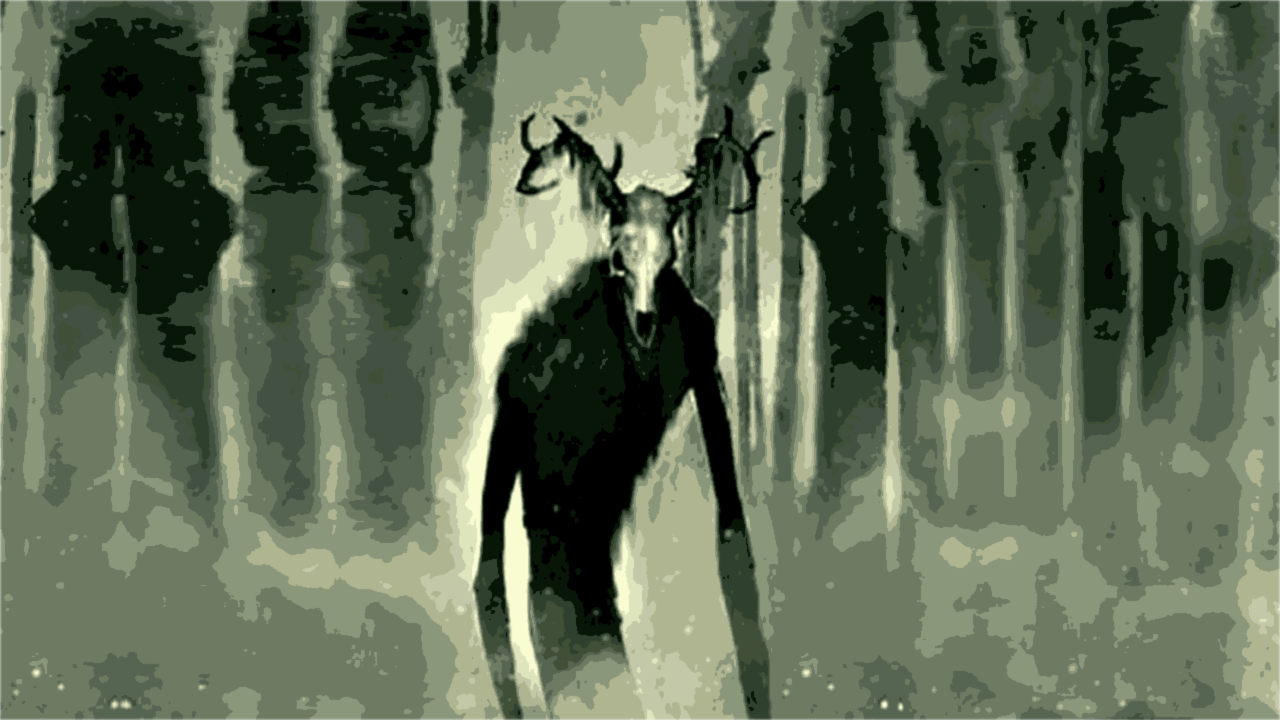 Manifesting supernatural fog is just one of their many otherworldy abilities.

Hiding in cabins or buildings won’t help. Wendigo unlock doors easily, or just break open obstacles with their inhuman strength. The monster usually uses such dwellings for a lair and go into hibernation when required.

Yet, cannibalism is not the only way to obtain the curse. Some Wendigo survive death and travel the Earth as a disembodied spirit. Essentially now a demon, the entity can possess the body of a normal person. This happens usually through a horrific nightmare, and when the victim awakens is consumed with a hunger for meat. Human meat, which turns that person into a Wendigo, essentially giving the possessing spirit a second life.

Those few that happen to survive an encounter with these monsters are far from salvation. They will be infected with Wendigo Fever, and feel an intense burning sensation within their legs. This burning sensation will increase and go up and down their body in a pulsating rhythm. The victim will suffer endless nightmares gnawing at their sanity, which leads to sleep deprivation, and unpredictably violent behavior. Eventually, the sufferer of Wendigo Fever runs out into the cold wild and one of two fates await them. They either transform into the monster, or they return but have completely lost their minds. 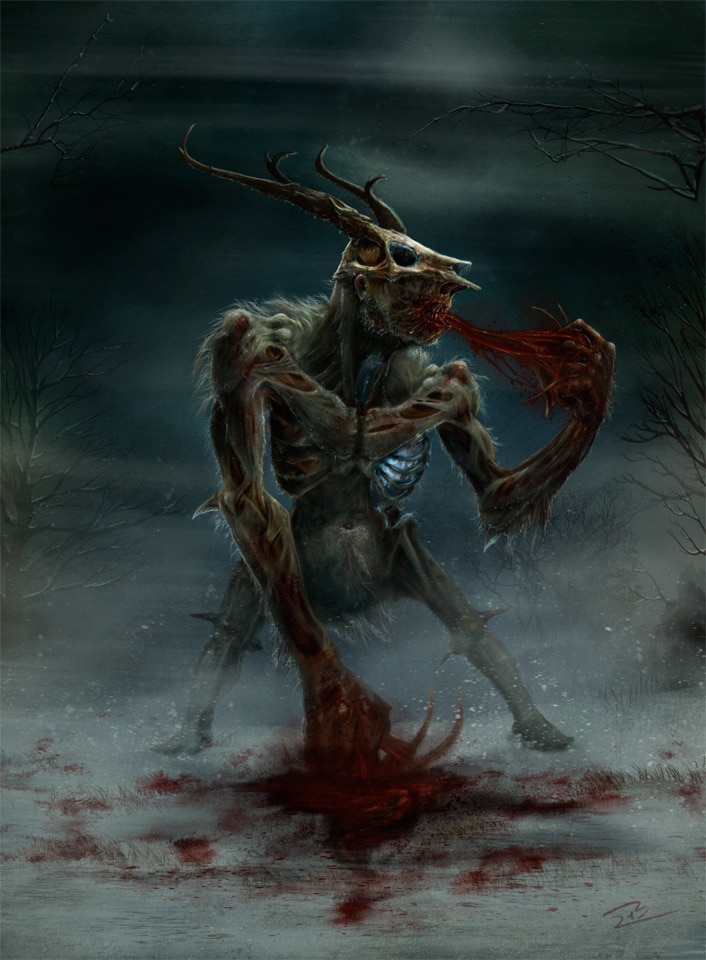 A well-fed wendigo is far more formidable than a hungry one.

How to beat them

Though these demonic monsters are incredibly deadly, they are not invincible. Always consult a local medicine man for a rundown of what you’re dealing with and how they can assist you. Gain as much insight as you can from these wise men and accept anything they offer you to help in the hunt. If you happen to be dealing with a disembodied Wendigo, only a Medicine Man can help you.

These demonic monsters actually have a variety of weaknesses. When Wendigo run out of humans to consume, they will get weaker, starve, and die. So only engage fully fed Wendigo if you have to.

Legend says that the essence of the original person the monster once was resides where its heart would be. Puncture the heart, and destroy the essence. Wendigo do not survive such a wound. Though an old Objiwa Native American story depicts a hunter killing a Wendigo by stabbing it in the head over and over with a normal hunting knife. This could have been a fluke of one particular Wendigo and is not advised to try, because the majority of the time, they shrug off any damage by mundane means. 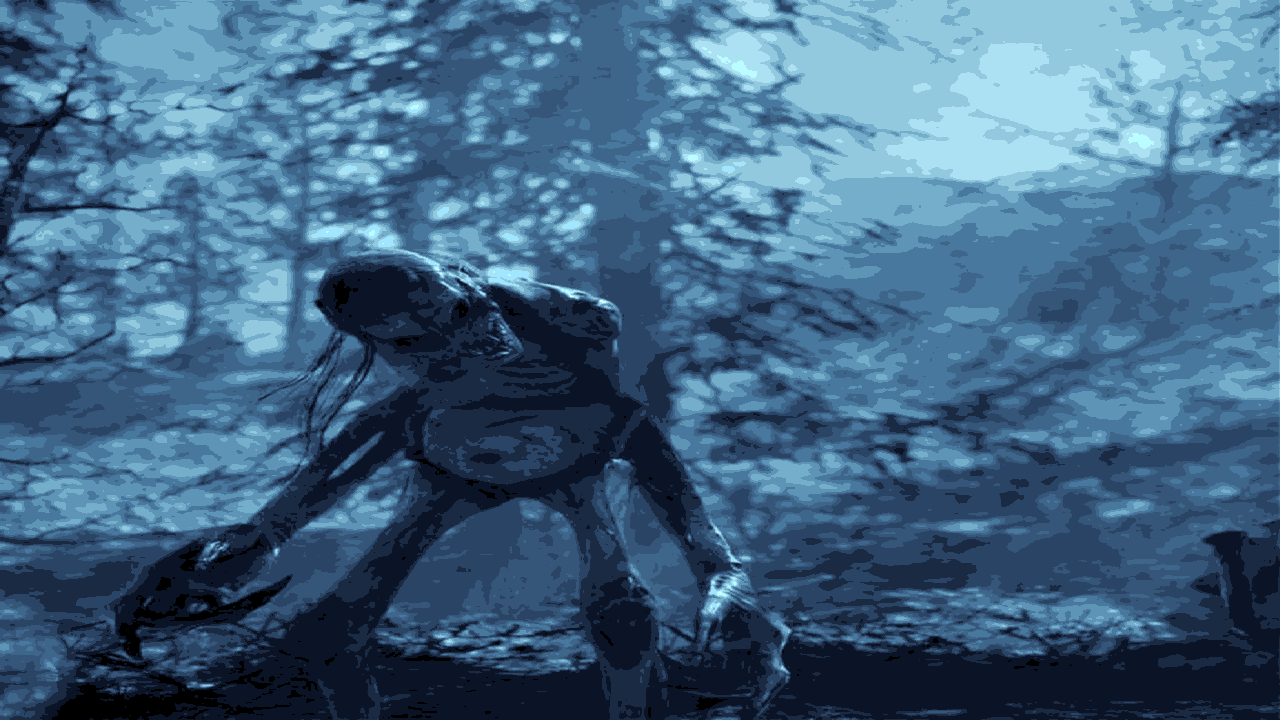 These monsters are also vulnerable to fire. Though Wendigo are apex hunters, their confidence can sometimes be used against them. Lure them somewhere with no exit and light the place on fire. Or utilize explosives with plenty of combustible debris in the area. If you can obtain one, a flamethrower will do wonders in killing Wendigo. Yet any destruction of their body through fire will do the job.

They are also vulnerable to silver, like many supernatural creatures. So constructing silver weapons of any sort will help out greatly. You still must puncture the heart though. Silver weapons blessed by medicine men are particularly potent to the point if a Wendigo notices you wield such an item it will avoid you. 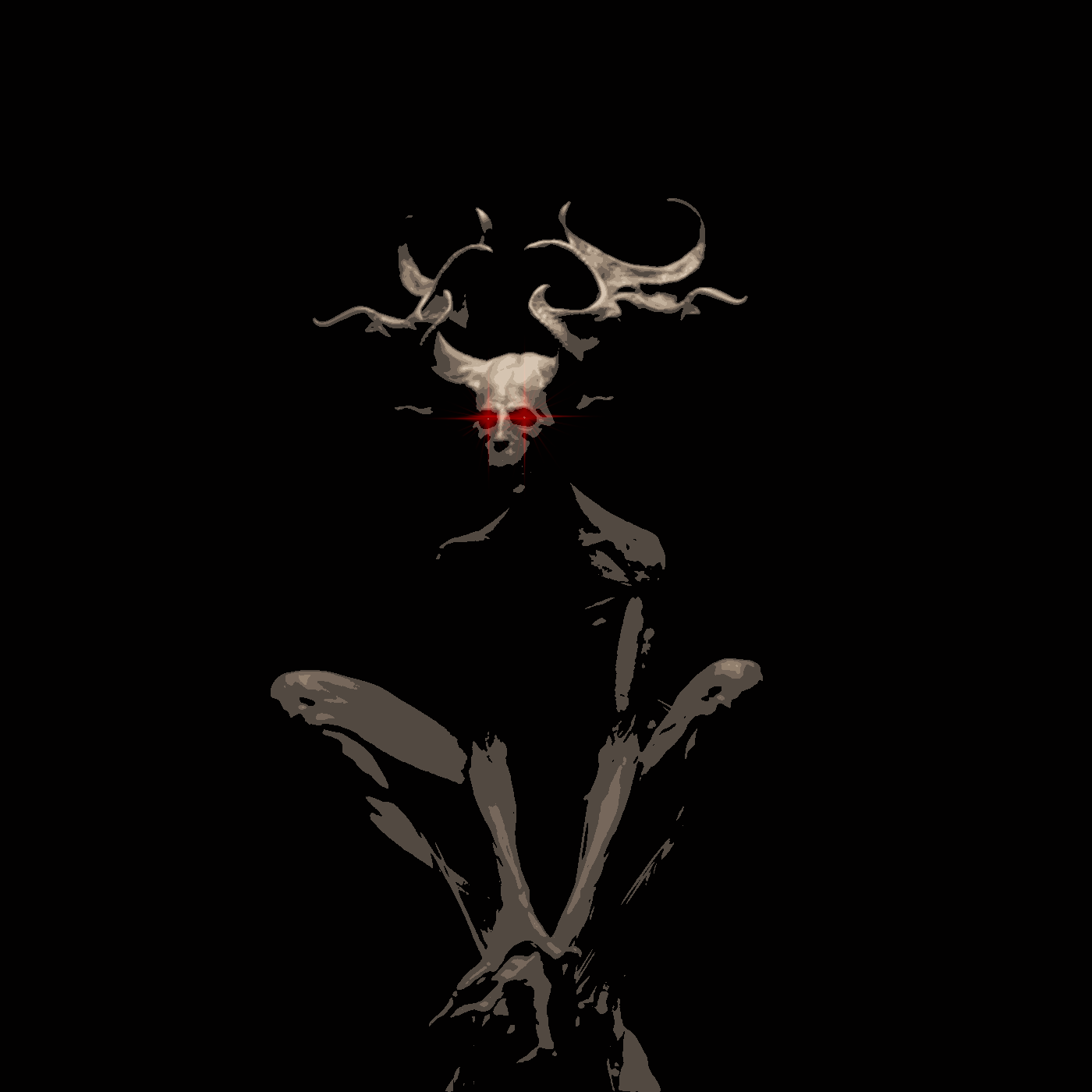 Would you eat human meat to survive?

They’re really interesting,, im glad i found this website. i was just reading about The Kuri

Thank you! If you’d like me to cover anything specifically for you inbox me at top bar of website. 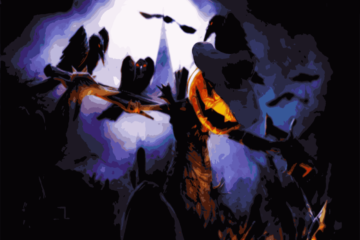 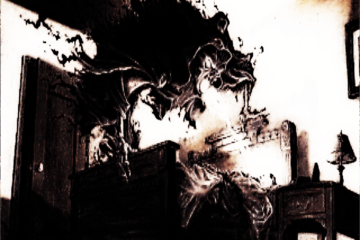